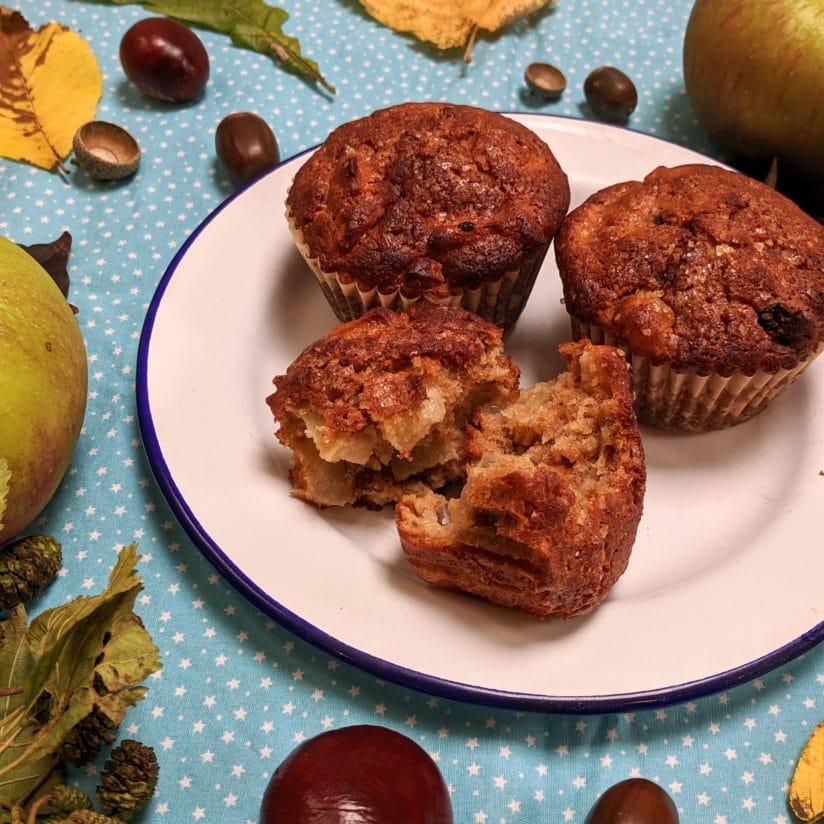 During apple season in the UK we can’t get enough of the sweet and juicy apple varieties grown for eating directly from the tree, such as cox or pippin. Visit an apple orchard during this time and the trees will mostly be stripped of the popular fruit within a week or two of the season starting, all except one type of apple tree: The Bramley.

This cooking apple is large, watery, tart/sour and cooks within minutes to a soft pulp. Traditionally used for apple crumbles, pies, sauce and more the Bramley has often been overlooked in recent years for all the above by its sweeter cousins and it sits there with its waxy thick skin feeling that neglect.

We’re here to champion this apple as when used in the right ways the tart taste compliments sweet dishes so well! Also, as it’s quick to cook you can throw it raw into cakes and baked recipes where it’ll soften during the cooking time perfectly…

Which brings us to these, Bramley muffins. We’ve taken a wholemeal spiced muffin mix similar to our Carrot Cake muffins included in the July Summer Snack Packs for the club and added in chunks of Bramley apple. The chunks can be rough and ready sized, which suits the recipe perfectly if you’re working with young chefs wielding the knife!

This makes a batch of approx 12 regular muffins, great for freezing for up to 3 months after they’re cool and eating cold or warm as you like.

This could also work so well with pear chunks, and maybe some pre-softened chunks of root vegetables (or grated) – parsnip could be delicious…hmm have a feeling we’re going to be eating a lot of veggie muffins this winter!